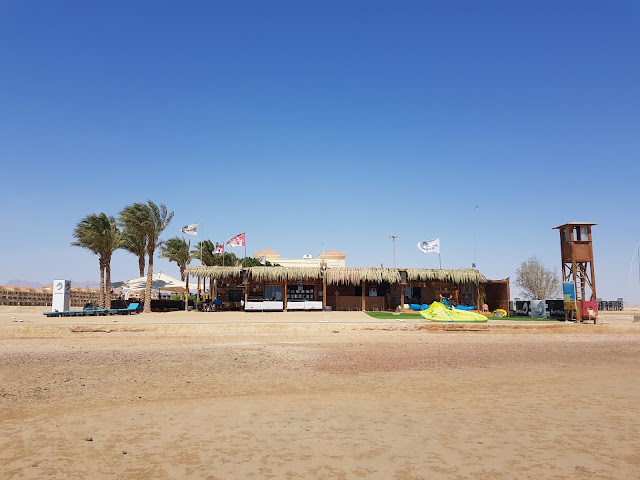 For a couple of years now, I wanted to visit Soma Bay, a famous windsurfing spot near Hurgadha, Egypt. On at least two or three occasions I already booked the trip, but I had to cancel it due to... Well, there were reasons, for sure. Already started to think it is not meant for me to go, but this year, the chance presented itself, and I took it. 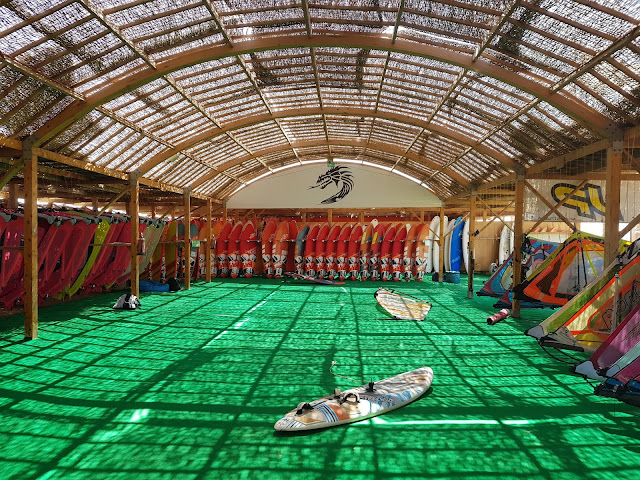 Beginning of August is not a high season in Egypt. People think it is too hot, and rightfully so – it was hot! However, the Palm Royal Resort (5 stars) is equipped with big and beautiful air-conditioned rooms, so no problems there.

No problems also while windsurfing (thinnest lycra for sun protection), except if you want to refresh yourself with diving into the sea. The temperature of the water is 27-29 degrees, but it feels like diving into a hot tub. Better stay onboard and let the wind cools you. 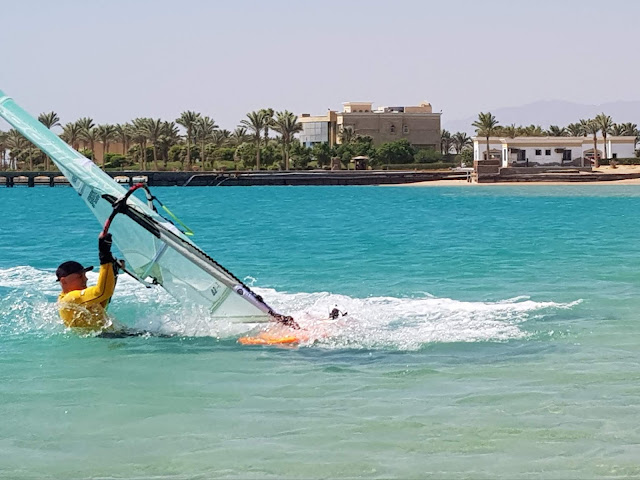 The Surfmotion station is well equipped with new JP boards and mostly NeilPryde sails. It is located near Palm Royale; if you stay at any other hotel or resort, you will have to take a taxi because the distances from resort to resort are huge.

The members of the stuff (mostly Egyptians) are cooperative, always in cheering mood and with a good practice of carrying your sail to the water (you have to take care of the board. 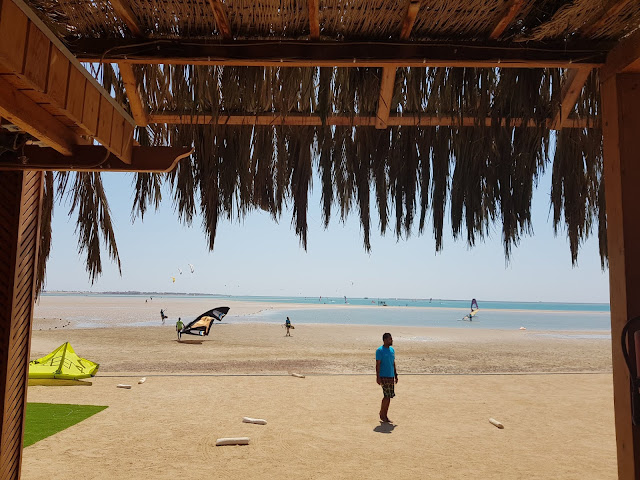 The spot... well, it is smaller than I excepted, at least the official part. From the entrance up to the flags on the reef (don't go further, they say) is less than a kilometer, and the whole windsurfer's area is some 200 meters wide. The (huge) rest of the Soma bay is reserved for kiters. Surrounded by thousands of teabags in the air, I couldn't resist the feeling of being an endangered species.

To go further out and explore the rest of this Red Sea diamond, apparently you should bring your own equipment, which I didn't, so I restricted myself to freeriding up and down over the gentle blueness. I did enjoy it, no problem, but after seven days of such pleasures, I would give a lot for my slalom board and sail and a nice long ride far away outside the official area. 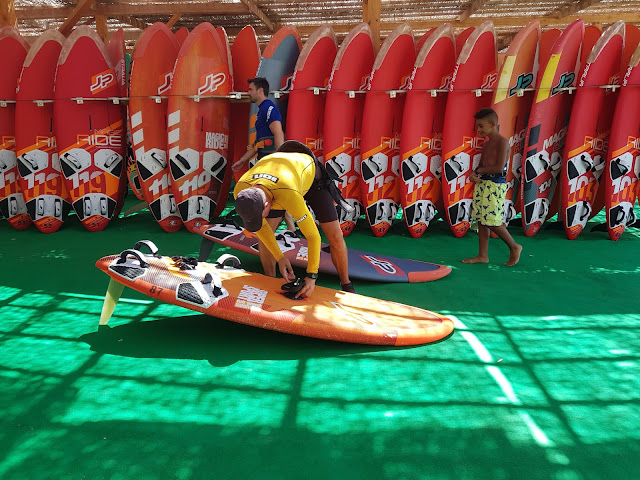 The wind was sweet, gentle, and surprisingly predictable. It started blowing around 10:00 in the morning (average 18-20 kt, quite constant), went down two hours later and died entirely after 13:00. I booked JP SuperSport 113, and it served me nicely three out of seven days with NP Speedster 7,2. The four other days, I took JP SportSport 125 and NP Speedster 8,2. All rather big, but it was full seven days windsurfing out of seven days stay! No complaints here. 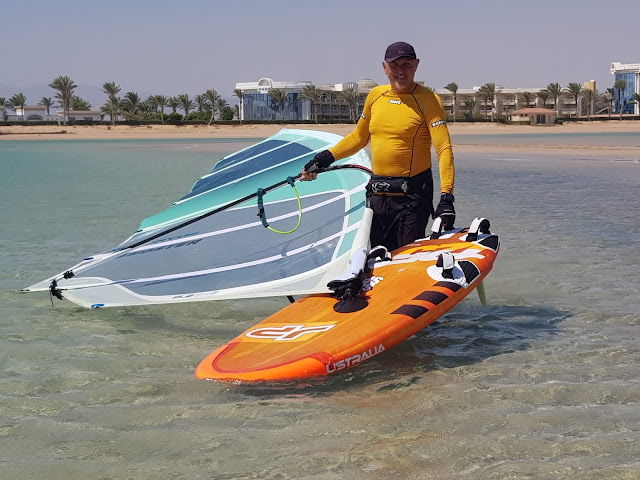 You might say that two hours per day is not much, but somehow it was enough for me. Maybe it was the heat, who knows. The rest of the days I spend resting in a cold room, swimming in a pool (the sea was too warm for my taste) and otherwise enjoying all-inclusiveness of Palm Royale.


As a vegetarian gourmand, I enjoyed the food. It was plenty and sufficiently diversified. Each day Palm Royale have a different dinner theme, so in seven days we went all over the world from Asian to Mexican. No complaints here, either. 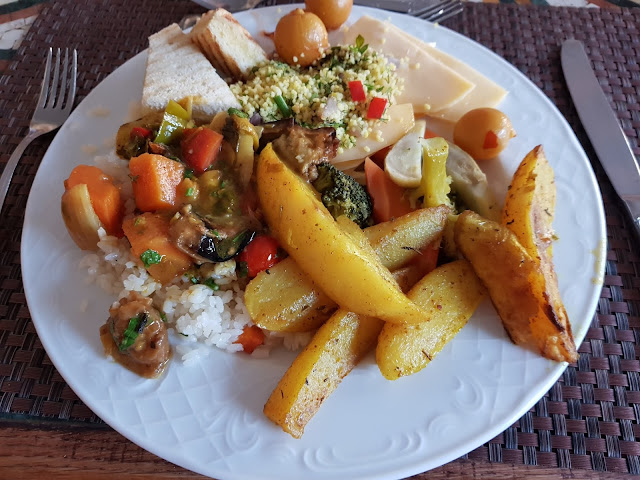 The only complaint is – no internet. Of course, they advertise free wifi everywhere. Apparently, there is wifi, and you can connect, but it is simply not working except for messages and, if you are lucky, somedays for mails. So, don't count on that; if you depend on internet connection and you need it, better buy some internet voucher on the airport (before you exit the terminal because after that you probably will not have a chance). 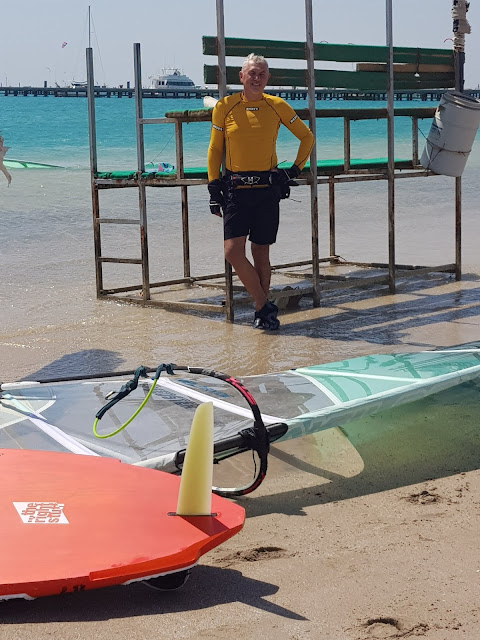