Since I've been able to windsurf (I've started back in 1978) I've  always been fascinated by speedsurfing. To go fast is fun, I kept saying to myself. Back then, my windsurfing activity was restricted to 2-3 weeks every summer, in which when possible I looked for the windiest spots I could find, to maximize my time into the water.

As years passed by, my love for windsurfing was always pretty alive and when, a few years ago, a good friend of mine asked me to attend to a Speed World Cup event with him, the first thing I thought was that I couldn't match up the situation. "It's too late", I said to myself, I thought I should have started earlier. But, somehow, in a few months I found myself on a Fuerteventura beach waiting for some wind. That was the 2006 Speed Word  Cup which was held in Sotavento together with the Fuerteventura PWA slalom event. I was not alone: there were all the top slalom sailors in the world, wanting to test their speed as well, as well as a few 'down to earth' guys like me. I never saw these top guns if not in windsurf magazines, and to be in the water with them was bit intimidating. But I was there, I spent money to be there and...yes, I had to go down the course, and I did it. And I was hooked. Hooked! That event really changed the last ten years of my life. I realized I could do it, there was a lot to learn but I could do it. Great!

Every year I started to attend to all the speed events that I could, together with a bunch of very good friends that I met during the events. UK, Ireland, Greece, Namibia, France, we crossed the sky many times to follow our passion. Results were nor very good neither really important to me, I felt more like the competition was in between myself and the speeds I recorded, instead of winning over somebody else. In other words, even now I like to see my speeds improving, but usually I'm happy if a friend is faster than me. In the end, he's been better than me, and I feel it more like a push to improve myself than a defeat. But it was interesting to see how slower I was compared to the experienced riders, so to have an idea of my performance. 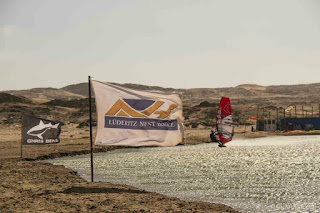 Back in 2008, I started to think that a record attempt could have been closer to my expectations, so I registered for the Masters Of Speed event in the Canal of Saintes Maries De La Mer, the fastest sailing spot in the world, at least back then. But the event didn't go through, and my last competition was in Karpathos, Greece in 2009. Then, somehow, speedsurfing stood still for a few years: no more races, no more calls. A pity, I thought.

In 2012, I heard about a new speed canal in Luderitz, Namibia. They were organizing a speed
event in this newly dug channel that I heard to be 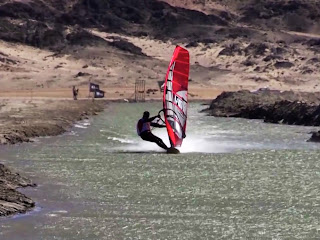 extremely fast. I tried to place my registration and...I was in!! First thought was obviously "will I be able to fly down the strip without killing myself?", second thought was "I'm too old for that" and so on. Lots of excuses, lots of little fears crossing my mind. Final thought, luckily, was "let's go there and see".

Luderitz is hard to reach, especially with 3 quiver bags. I flew 14 hours, drove alone for 2 days for 1.200 km through 2 unknown southern Africa countries and when I got there I said to myself that the record attempt was going to be "bread and butter", compared to what I faced during the trip. Actually it was not really like that, but the excitement I started feeling the day I reached Luderitz was really a great, great feeling. The next morning I was at the canal at 10, with many other speedsailors. The atmosphere was nice, with many friends welcoming, and that was really helpful. That fist day was really windy, something like 35kts gusts, and I ordered myself "now you have to go". Not an easy task, when you see the the canal in some spots is probably no more than 6m wide and you are told it can have shallow spots here and there. But if they were going, why not me?? I only made one decisions: no harness on the first run: in case I fall, I thought, at least I'm free to fly (hopefully, in the water). 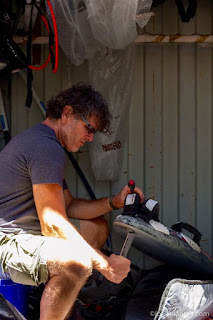 From then on it all was very quick: jumped in the water, made my waterstart, started planning. Footstraps in, you gain speed with wind on the side then, when the canal bears left, you slingshot yourself down the strip, with the wind pushing you with a 130 degrees angle. No harness, no breathing. Shhhhhhhhhhh, the water boiling under my 49 iSonic. Some 20 seconds after I stopped (actually I crashed, with no consequences) and my GPS was showing 39,5 knots average over 20s. With no harness!?! No you kidding….WOW!

Buried into the (too many?) words that I've written in this post, 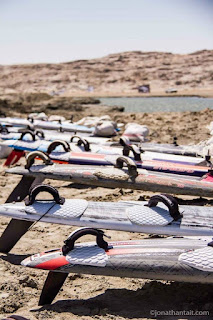 there's a couple of messages I would like every speedsurfing fanatic to listen to, and the first one is: “YOU CAN DO IT". If I did it, my friend, you can do it. Because I'm an average amateur windsurfer, that has got some better recently thanks to the experiences I've just written about, with the help of many friends. I’m old enough to try to use my head better than when I was 25 but too old to get the best out of my big body. Provided you have the money and time, your windsurfing skills are reasonable and you like going fast, you can do it, and I’d swear that if you’ll be there you’ll have some veterans trying to help you to get the best out of your experience. If I’ll be there, I’ll be one of them for sure.

The second message I’d like to send you is that, at the end of your stay in Luderitz, you’ll probably find that GOING DOWN THE COURSE AT 40+ KNOTS IS ONLY PART OF THE OVERALL EXPERIENCE. The incredible place, the different culture. the riders from different countries, the spirit that keeps them together, all these things make this venue much more valuable than the speed attempt itself. Moreover, the Luderitz Speed Challenge is not a race, it is a record attempt. So there’s no official ranking, and basically you
race against yourself, or your GPS if you prefer. And this is what I like so much.

If you go to Luderitz, I’d swear you will never forget it. 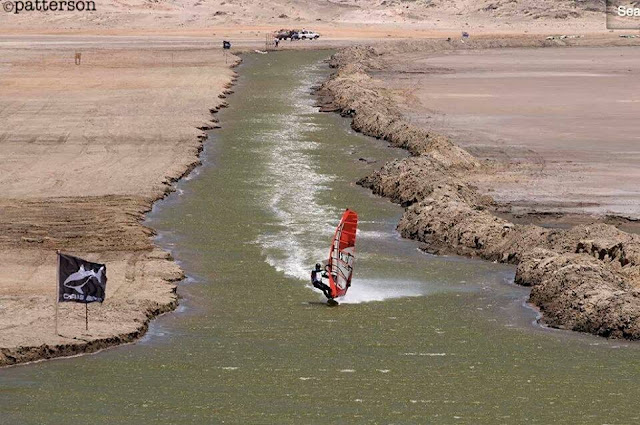 PS: my first year in Luderitz I used my Starboard iSonic Speed 49 with Severne Reflex III 5.6. Now I know that to go faster you need a 40-44 board, 5,6+6.2 slalom sails and a few 18/19/20/21 asymmetrical fins. Sizes depend on your weight, too. Helmet, Weight+flotation jacket and spine protection are a good advice. And your GoPro, obviously.