What Is Your Heart Doing While You Are Windsurfing? 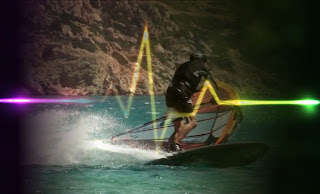 I admit, two previous articles were written rather technically. I hope they will be of some use to you. The main point was: keep your heart rate down, as low and as often as possible.

However, while I believe that this is valid for conditional training and general fitness, windsurfing is something else. Do you know what is your heart doing while you are windsurfing?

I would like to share with you my experience during the last couple of months. I am not sure I can explain what is happening and what the significance of this numbers is. See for yourself or, better, check it for yourself, and share with us.

It is not enough to say that I was surprised by the numbers – the right word was: shocked! Namely, it was enough for me just to approach my windsurfing equipment and HR was over 100 bpm! During rigging, it is around 120, peaking at 130 or even more. Just rigging!

I thought that I am in quite good shape. I am doing my exercises (biking and gym) averaging on 60% HRmax – 125 bpm. In windsurfing, it seems that I am there without even getting wet!

Now, while actually windsurfing, my heart averages (during 90 minutes of windsurfing) from the same 60% (125 bpm) up to 75% (142). That is more than I expected, because that includes periods of resting.

Once, during one hour of pure windsurfing in moderate to strong wind (25 knots), average was almost 80% (145 bpm).

When you look at the peaks – they go up to 103% of HRmax (172 once) and many times around 160. The peaks happen during jibes, speed runs and gusts (in that order: a power jibe and speed run will almost for sure get you over 90%, and gusts will increase HR for sure).

During windsurfing in straight line, I was sometimes able to keep HR around 60% (120-130 bpm), but mostly it was higher (135-145 bpm). I am not sure I noticed any connection with the strength of the wind by itself, but gusty wind, even moderate or light, will increase HR.

Also, I have noticed many oscillations in HR. It is all over the place, so to say – quite different from other excesses like biking or running. I suppose that is due to a lot of anaerobic activity which happens during static effort, short bursts of energy in gusts, jibes and speed runs.

And, what surprised me the most: when I am on the bike and getting 147 bpm, that is 80% of my HRmax, I am breathing heavily, gasping for oxygen and cannot endure such effort for longer than a minute or two. When windsurfing, and pumping with that HR, I am ok, easy, relaxed, breathing through nose and happily surfing around for as long as I wish!

Now, as I said, I have no sure explanation why this happens. There are no available data (at least I could not find them) about HR and windsurfing. One of my speed surfing friends once told me that he used a heart rate monitor for a while, but then he gave up, because "he could not stand to look at such high numbers". Also somebody told me (but I didn't see the paper) about comparison of heart rates in wave, freeride, freestyle and slalom. According to that word of mouth, slalom windsurfers had the highest heart rate, especially during turning around the mark.

I can try to explain some of it by attributing high heart rate to adrenalin rush which we all get from windsurfing. Because, it is obvious to me that beating 145 bpm while windsurfing is not at all the same as keeping that rhythm in other sport activities.

Of course we like excitement – that's why we are windsurfing. However, putting that aside, the fact is that our heart is working hard during windsurfing, and that opens some very important questions, especially as we get older.

First of all: are we ready for windsurfing? The effort of windsurfer’s heart is probably equal to the effort of some professional athlete. And we don't have the same preparation, the same level of fitness, etc. We should have it, though! If my HR readings are at least partially applicable to an average windsurfer, than preparation for such activity must be more serious, especially if you don't want just to go out couple of times per year, but rather to actively improve your skills, speed, etc.

And, second, what about lowering heart rate during windsurf? Is this idea applicable to that kind of sport with so much up's and down's, turns and twists? I believe it is. Peaks will probably not go away, but in general, lowering the average should be possible. Exactly how to do it, that is what I intend to find out during a time to come.

Email ThisBlogThis!Share to TwitterShare to FacebookShare to Pinterest
Labels: training