It's not about winning 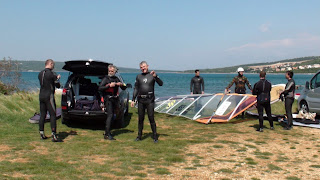 Talking about competition. Is it about winning? Or, is it about giving the best of you? Or, maybe, about something completly different? My early days in sports were full of competitions. I was on the edge, always on the adrenalin of winning the game. It did not made me happy. I enjoyed more in the beauty of some actions with my team mates, than in pure winning at any cost.

Than I get hooked in windsurfing. And I understood: what I am, and how I am doing, does not have any connections with anybody else, except myself! Wind and the water – that's my team mates. And others with the windsurfing boards and sails – they are my friends. Here is one story from John Douillard's book "Body, Mind and Sport". Makes you think twice next time when you will think about competing. It can be certainly different than it is in todays sport.

I once heard a beutiful story about the spirit of competition. An Eglish naval officer was morooned on a remote island in the South Pacific. He had befriended a native man to whom he was constantly trying to prove his superiority and the superiority of his culture. For the Englishman, everything was a contest – from who can build a better fire to who could design a more functional hut. This puzzled the native, for whom life was fun, like a game. He simply could not fathom the Englishman's intensity.

One day the Englishmen, in tipical fashion, threw a challenge to the native. Pointing out a spot abut half a mile down the beautiful sandy beach, he anounced, "We will have a competition from here to that distant point." The native agreed. The Englishman always taking charge of things, set up the conditions: "We will train in our own style, privately, for two weeks. On the fourteenth day, we will compete."

When the day arrived, they took their places on the starting line, and the Englishman fired his pistol in the air to set them off. With his usual intensity, pushing himself to the limit of his physical ability and grimacing with the strain, he drove himself through the sand until, gasping for breath, he lunged for the finish line. Exhausted and soaked in sweat, he turned to see how his opponent was doing.

To his joy and amazement, the native was only about halfway to the finish line. The Englishman watched him float gracefully along the shoreline with long, comfortable strides, a smile on his handsome face. When he finally pranced across the finish line he found the Englishman jumping up and down and shouting, "I won! I won!"

The native looked at the Englishman in disbeleif. "What? YOU won? No, I won. I was the most beautiful!"

The story makes you wonder: Who had the better idea? Is it better to win at any cost or simply to enjoy the game? Taking first place is only one perspective on what it means to be a winner. For the native, beaing beautiful was the real competition. Maybe the ancient Greeks were right to emphasize physical exercise for the cultivation of the self, rather than the conquest of an opponent. The modern-day cred of "No pain, no gain" and Vince Lombardi's "Winning is everything; it's the only thing" just may be due for revision.

Email ThisBlogThis!Share to TwitterShare to FacebookShare to Pinterest
Labels: soulwindsurf