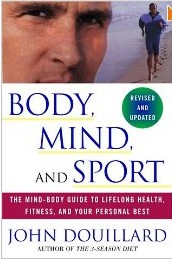 Many sport proffesionals and lately, more and more amateurs, explore the wonderful world of "the Zone". It is an experience which at first seemed strange and rare, but as times goes by, it is more and more common. Personaly, I did experience the Zone many times, even before i knew how it is called. But, strangly enough, the name and the description are somewhat elusive. It is hard to describe what is actualy happening when you are in the Zone. Initialy, when I started to windsurf, I noticed that this expirience comes more offten during this sport, in comparison with other sports I have been engaged in the past. Hence, soulwindsurf was born!

But, there is a lot to be said about the Zone. One of the best books I encounterd (and even published in Croatia via Double Rainbow publishing house) was John Douillard's book "Body, Mind and Sport". Here is a short part from the introduction of the book - a nice explanation of "the eye of the storm"...

According to legend, Bodhidharma – who latter became known in Japan as Daruma – thought a form of Budhism for developing mind and body that is known as Zen. He told the monks of Shaolin that he would teach them techniques to develop the neccesery physical and spiritual strenght to master the Way of Budha, but soon he found that they were physically weak and unable to keep with his training.

The focus of their life in the monastery had been on the inner aspects of life – the mind, or soul – with litlle attention to the health and strenght of the body. Bodhidharma taught them although Buddha's message was about the soul, body and soul are really inseparable. You cannot train one without the other.

The physical techniques that Bodhidharma taught were not for the purpose of overcoming opponents but for the integrated development of body, mind and spirit. Using these methods, which are recorded in the ancient Ekkin Sutra, the Shaolin monks became renowned for their physical and spiritual strenght, courage, and fortitude.

The message of Zen Buddhism, brought first to China and than to Japan from Vedic civilization of India, was that enlightenment was not meant to be enjoyed only in silent, disembodied contemplation. It was the way of life, to be lived at all times, or, as the famous Zen sayin goes, "while carrying water and chopping wood."

Bodhidharma's work at the Shaolin temple led to the development of Kung Fu and Tai Chi. Kung Fu is more aggressive form, which displays the dinamic "yang" aspect of nature, and Tai Chi reflects the more peaceful and silent "yin" component. Both of thise qualities may be developed expressed during exercise in oredr to cultivate regular experience of the Zone.

In martial arts, or in any other sport, the only way man can harness the power and the strenght of nature and the universe is to mimic nature's way. Wherever nature exist, this formula also exist: dynamic action along with perfect silence. The dead of winter is balanced by the activity of summer. The more dynamic the activity, the more dramatic the contrast of opposites. The bigger the hurricane, the bigger its eye.

Exercise is a proven approach to life's ultimate goal, which modern Zen master D.T.Suzuki called "motionless realization". Tennis great Billie Jean King describes it in hers autobiography: "I transport myself to a place beyond the turmoil of the court, to a place of total peace and calm." She was on the court but beyond the turmoil of the court. She was in the Zone, where the most dynamic physical activity coexist with mental composure, peace and calm.

The legendary Ted Williams, who coined the phrase "the Zone", said he couild see the seams of the baseball as it came whirling up to the place at 100 miles per hour!

Williams had no doubt that he had seen a 100-mph fastball with the close-up clarity of a slow-motion instant reply, yet "experts" claim that it is opticaly imposible. The 4-minute mile was once considered impossible, as were 500-pound lift and other feats that today are accomplished by many. I read recently that experts now predict a 3:30 mile by the year 2054, one hunderd years after Roger bannister's boundary-breaking achievement. Records fall every day. So, what is "imposible"?

New records generaly do not leap far above previouse ones, yet no one can predict final limits. As soon as a record is called "un beatable," someone inevitably comes along who is capable of going faster, higher, farther. It is said that fish are 80 to 90 percent efficient in the water, while a world-class swimmer is only 8 to 9 percent efficient. Does that mean that we will never be truly efficient in the water, or that our potential gains are unlimited?

Email ThisBlogThis!Share to TwitterShare to FacebookShare to Pinterest
Labels: the zone